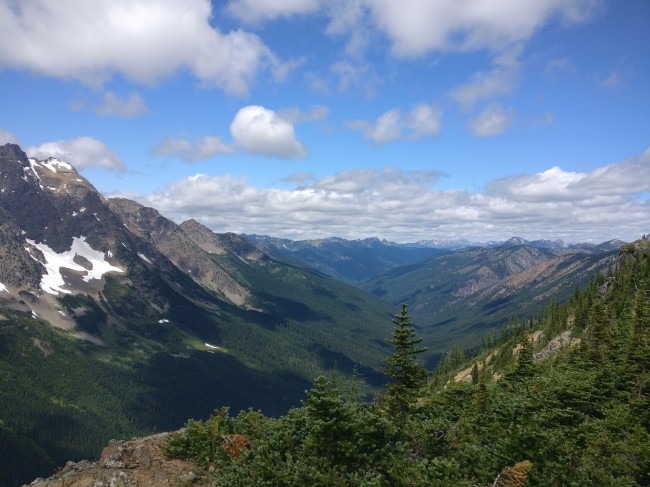 On Wednesday, July 12th we started heading toward Hart's Pass. Around 4pm we came to a point on the dirt road to Hart's Pass that was too washed out for my car to make it over so we piled out of the car and watched it drive away leaving us in it's dust. We were 7 miles south of Hart's Pass, and about 50 miles north of Stehekin, WA (the closest town). 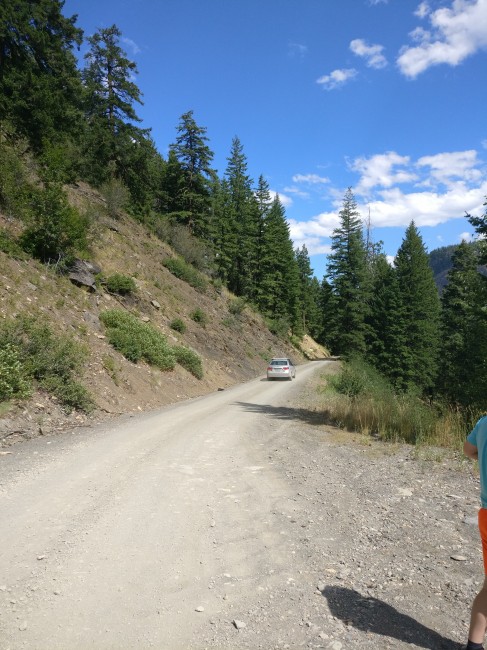 We took a few minutes to get our things situated and started walking up the road toward Hart's Pass. None of us really realized how horrible it would be to walk up a gravel mountain road meant for cars. Within about 15 minutes we were all questioning our life decisions. The road was dusty and hot with no shade to be found. The incline of the road was far steeper than basically any of the the well graded PCT that lie ahead of us. After only about 30 minutes, and a little over a mile, of walking we crossed paths with a black bear (unfortunately, I was way too panicked to take a picture). We kept our distance and made loud noises and it quickly got spooked and ran off into the woods. We continued walking up this hellish road for about 3.5 miles. During that time a few people stopped to enquire about how we were doing, but none of them could offer a ride for a variety of reasons (mostly lack of space). Finally, one of the trucks that had already passed us came back and picked us up. I feel like a jerk for not remembering his name, but he passed us on his way up to Hart's, drove to the camp ground, set up his camp / unloaded his car, and drove all the way back down to see if we still needed a ride (faith in humanity restored).

After a quick 3.5 mile drive up the rest of the road we were in front of the last toilet we'd see for 4 days and just a few feet from the PCT. We all gathered our things, had snacks, drank some water, and got out on the real trail. Compared to the dry, dusty, hot, steep road the trail was heaven. It was beautiful, shady, relatively flat, and surrounded by beautiful wild flowers in full bloom. 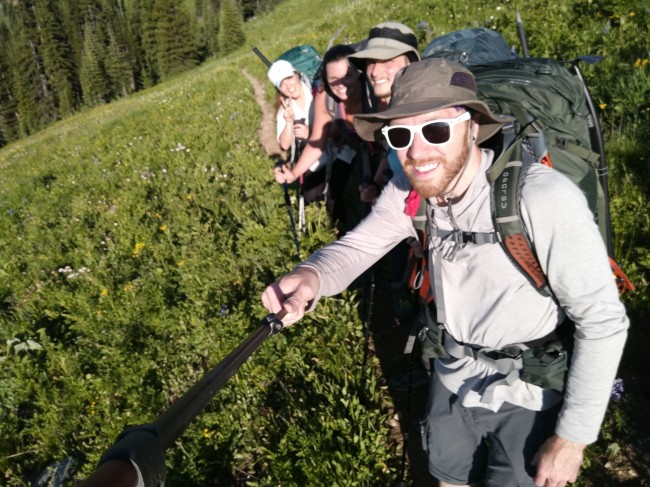 Our mood was greatly improved and we were all very excited to be on the actual PCT, but we only had a few hours of day light left. We stuck together throughout this first short day, and headed for a tent site about 5 miles ahead near Windy Pass. We got there easily and quickly set up our camp for the first night. 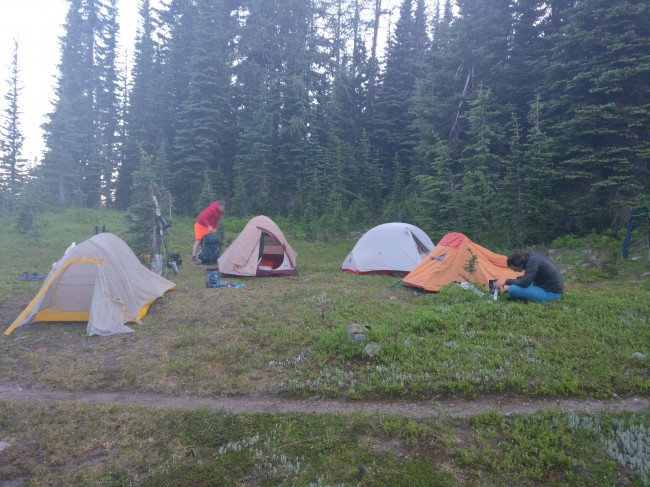 The second day (our first full day) we got our camp packed up and got moving north (toward Canada) a little after dawn. Before we left we decided we'd camp at Woody Pass which was 14 miles to the north (about 11 miles south of Canada). We quickly split up based on the pace we were each comfortable traveling, but we'd wind up meeting up again when we'd stop for breaks or to get water at a stream. This is the way we hiked for the rest of the week; a loose-nit group of independent hikers that would meet up for breaks and sleep. One member of our party decided to push ahead and do a few more miles (we passed her on the way back from Canada the next day and haven't seen her since). The rest of us camped at Woody Pass as planned. This day felt great from beginning to end. The weather was perfect, and it felt amazing to be outside. I saw an endless barrage of incredible scenery, and my body was feeling great at the end of the day.

Unfortunately, the next morning I woke up with my eyes sealed shut with yellow/green crust, and so swollen I could only open them about half way. It seems I'd contracted conjunctivitis. At this point I was almost 70 miles from the nearest town (which didn't even have a doctor). This realization filled me with fear. It made me realize this was all real and that if something went wrong there was no real way to quit. My only option was to just keep going. 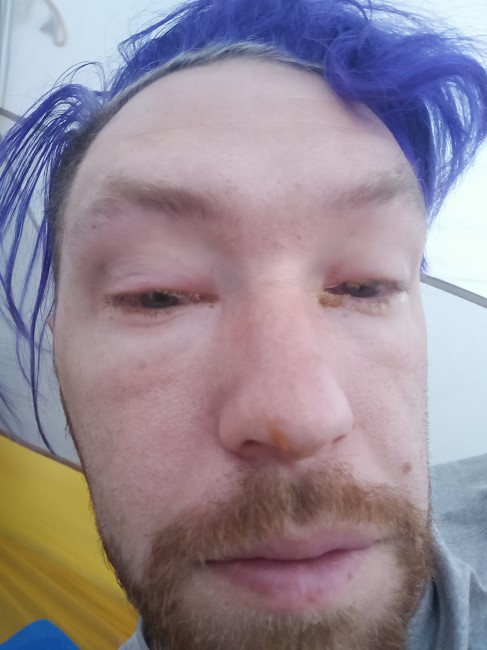 From Woody Pass we decided to leave our tents set up and hike the 11 miles (22 miles round trip) to the Canadian border with just the days worth of food and water (and first aid kits, jackets, etc). In the morning we talked about the risks of this. For example, if something happened we'd have no shelter with us so we HAD to make it round trip. In the end, we decided that it was still a good choice and a good way to ease into the longer days with less weight on our backs.

We agreed we'd take our time getting there and back since we had so much day light. We kinda started off that way, but the last 6 miles or so toward the border we got in a good rhythm and hiked it with almost no breaks at around 3 mph. It was an incredibly beautiful hike. Truly like nothing I'd ever experienced before. The last 4 miles were very over grown, really buggy, and littered with bear scat; not an area I wanted to stop and take a break. We made it to the border around noon and we all felt pretty good. We took about 30 minutes there to have some food and water and relax. 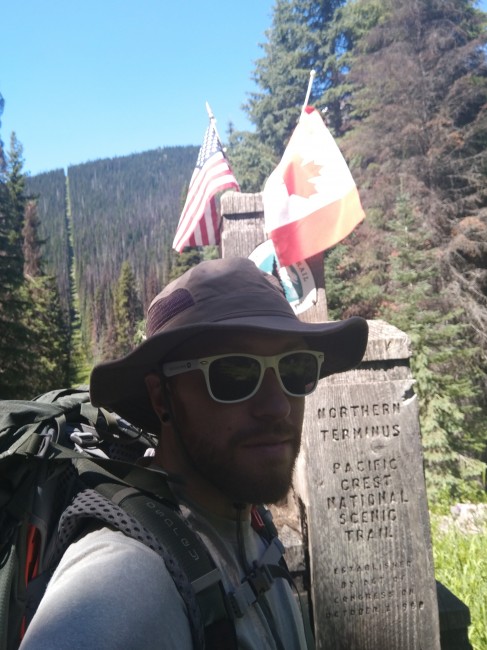 The way to the border was mostly down hill which was nice, but it also meant the way back would be mostly up hill. For some reason (mistakes were made™) we decided it was a good idea to push hard on the way back. This wasn't something we discussed, but we were back to camp with about 5 hours of daylight to spare. About 2 miles before we made it back my ankle started hurting. Later that night I could barely walk, and I had the stark realization that I had conjunctivitis, couldn't walk, and I was 20 miles from the nearest road, and 50+ miles from a town. I went to sleep that night scared and questioning my life choices.

Surprisingly, the next morning I woke up feeling great. My eyes were glued shut again, but washing them clean was no big deal. The important thing was that my ankle miraculously felt fine. We originally talked about doing the 14 miles back to Windy Pass (where we stayed the first night), but we decided we should push all the way back to Hart's Pass (20 miles) so we could start the next day on fresh trail. In retrospect (mistakes were made™), this was probably the beginning of my undoing. When we crossed Windy Pass I was feeling fine. By the time we got to Hart's Pass my ankle was sore again, but not nearly as bad as the night before so I figured I'd be able to sleep it off.

The next day my ankle was slightly tender, but really not bad. We did 14 miles that day and at the end of the day I felt great and even pushed for doing more miles, but everyone else was feeling tired so we stayed there (probably the right choice).

The day after that we pushed ourselves and did 23 miles. Within about 5 miles my ankle was killing me. Honestly, I should've recognized this and just set up camp and caught up with the rest of the people later, but, instead (mistakes were made™), I pushed myself to make it the 23 miles to the camp. I limped my way there and met up with my new friends just before sunset. The last 6 miles were oddly easy. I'm not sure why exactly, but the ankle pain subsided and I was able to really crank out the last 6 miles. Throughout the day I stopped about a half dozen times to ice my ankle in snow and streams. 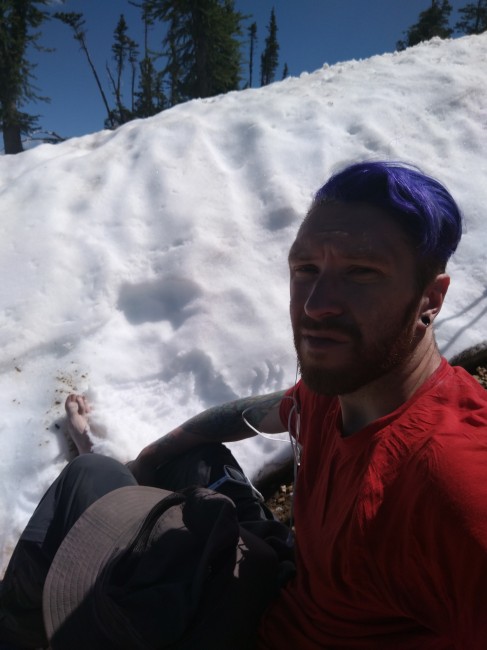 We were only 13 miles from Stehekin so the next day we got up at 5am hoping to catch the noon shuttle bus into town. I woke up feeling ok. The conjunctivitis seemed to be clearing up on it's own and my ankle was only slightly tender. However, once I started hiking it was very quickly obvious that I couldn't keep pace with the others, but I sure as hell tried (mistakes were made™). About 3/4 of the way through this day I finally admitted to myself that I was injured and slowed down. Looking back on it I'd been walking on a busted ankle since the day we touched the border, and it was time to start making some better choices. I took my time getting through the last few miles and took ample breaks, but the damage had been done and it was far too late.

I got to Stehekin, set up camp, and accepted how badly I was actually injured. My ankle was swollen and my foot barely looked like a foot. I wound up staying in Stehekin for 2 days hoping to bounce back while watching all the other hikers I'd met in the past week walk (or limp) in and back out to the trail. A handful of people called it quits and headed home.

Stehekin is absolutely beautiful and a great place to spend some down time. Lake Chelan is frigid and perfect for icing my foot a few times a day. The campground behind town was free, the restaurant in town was pretty solid, and the staff was extremely friendly and caring. However, they had one restaurant, one store, and little else. So, after the last 2 people I knew in town made their plans to return to the trail I finally had to accept that I wasn't going to be able to go back in my condition. So, with the help of a friendly ranger (that happened to be heading into Seattle anyways), and later a ride from my friend Soren (who was strangely on the same boat as me) I made my way back to Seattle.

I'm really hoping I can make my way back to the trail next week. I'm planning to jump back on at Snoqualmie around the time I originally planned to make it there which should put me a little ahead of the others I was hiking with. I'm hoping to do a couple shorter milage days alone before they catch back up with me and we can hopefully continue hiking together.

There are a lot of lessons to be learned from my experience so far. Number one is LISTEN TO YOUR BODY! Number two is IGNORE YOUR BODY AND TAKE MORE BREAKS THAN IT ASKS FOR!

As I said, I hope I can continue hiking with the same people, but if my body is kind enough to allow me to head back to the trail next week I'm going to return the favor by hiking my own hike and not pushing beyond my capabilities just to keep up with people. Just gotta remember it's not a sprint it's a 100x marathon.